Assigned To
Authored By
Tags
Subscribers
View All 21 Subscribers

Maybe there is a better was to solving this, e.g. with a shortcut for this setting in the sidebar (maybe with a checkbox in the setting itself "show shortcut in sidebar") to implement an opt-in for this. This would make it easier to change the wikipedia language version :)

Source (only for OTRS members!): https://ticket.wikimedia.org/otrs/index.pl?Action=AgentTicketZoom&TicketID=7825568

+1 for this feature. This is actually one of the very few things i miss from the honourable old Wikiamo (iOS) app. I'm from the Netherlands and i switch between the Dutch and the English language editions multiple times per day. It's very frustrating to have such a long interaction path to switch between multiple languages.

On the Wikiamo app (screenshots attached as an example) the path to change the language is:

Note that the current search query is not deleted and is repeated in the new language.

On the Wikipedia app it's:

That doesn't seem a lot longer (one step), but in my experience you usually want to switch languages because you're searching for something, and in that case the path is *a lot* longer. Given that you have the search panel open:

In the Wikiamo app it's only two steps (Hit language code --> Select language) instead of five.

IIRC, some users instead suggested allowing searching multiple languages at the same time...

Any ETA when this will be worked on? - In the duplicate ticket https://phabricator.wikimedia.org/T87154 some were considering this to be a topic for the 2015 hackathon in May. - Pau Giner even created a few nicely looking mocks for that.

@Mholloway, Need to meet with you to see this/ or kindly add screenshots.
I can't see this on the latest alpha.

The language selection button is only visible when search is active -- that might be why you're not seeing it. It should display to the right of the search bar when you tap to begin a search.

The screenshots look really promising! Any chance this will also make the iOS release?

@Husky -- I haven't seen it personally, but it looks like it's coming soon on iOS if not already released: https://phabricator.wikimedia.org/T97780 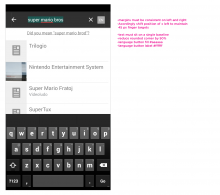 Regarding this screen, it looks like we are using using Display1 (34sp)/ Headline (24sp) for all list items.
I suggest downgrading the 'Use system language' to one size below and setting that in a different color.

I Just chatted with @mdholloway and I would like the break up the interaction and visual design for the system language dialogue into its own task.

Breaking off a separate ticket for the second screen - https://phabricator.wikimedia.org/T105429

@Vibhabamba I discussed the design with @Dbrant earlier today and made some changes following from that conversation -- here are updated screenshots.

@Vibhabamba -- #aaaaaa looks fairly light for the button fill -- can we go a bit darker?

Agree, we could try #777 or #555
Also the button could be a bit bigger, I realize the two letters are hard to read.

Great job everyone. - I totally love the new feature! :-)

Verified, an updated app with this feature included was pushed out through Google Play today, and it works great!