The description shown is pulling from the "Chinese" row in Wikidata, so there are characters being used and displayed in one variant when the language is set to the other. (In the example of the "China" article, there are Simplified characters in the description "中华人民共和国" showing on the Traditional character variant of the article)

MCS is not used for zhwiki until Parsoid and RESTBase can handle language variants.

So wait... Wikidata has descriptions in Traditional Chinese, Simplified Chinese, and another one called "Chinese"? What does that third one mean? Is it another variant all to itself, or does it "default" to traditional or simplified?

The China wikidata entry actually shows a different description for multiple variants, but only uses the "original" Chinese one.

This can be better illustrated by taking an example Chinese wiki article with no description yet, which looked like this:

After populating the description in Wikidata, the table is only updated for the Chinese only article:

TL:DR; Looks like the behavior is similar to Simple English vs English in that a row can be created for the different variants in wikidata, but we are only pulling in whatever is in the 'Chinese' row without any character transforms being applied.

When I tried to keep only Traditional Chinese label and description label on the Wikidata, the app did not show the description.

To repeat (and expand) relevant discussion from T177342:

Neither API currently provides support for specifying a language variant for Wikidata descriptions. Even the mobileview API's 'variant' parameter has no effect here. It could be added, but we'll run into the same issue as with T176678 that the mobileview API is deprecated and in principle we shouldn't be spending time on it.

For the mobileview API, this is the method I think we'd need to update for variant support: https://github.com/wikimedia/mediawiki-extensions-MobileFrontend/blob/27599dfbdaecf1ca0a12164e648a14facefd00d2/includes/MobileFrontend.body.php#L189-L209

As a side note, I get the sense no one would object to moving the mobileview API into the MobileApp extension as discussed on T176678, which would remove the need for the Reading Web team to be involved, though that would still leave an open question about how much work we should be putting into the mobileview API on an ongoing basis. (Also, such a change should probably be announced in advance on mobile-l and wikitech-l.)

Some of the problem here is that historically LanguageConverter does not specifically tag the source language variant of the text, since it is assumed it can be inferred from the character set. This is more-or-less true for Serbian (latin/cyrillic) and Chinese (simplified/traditional) but falls down badly with (say) British/American English. And it doesn't work 100% even for Serbian and Chinese, depending on the exact input text. The original article text in Wikipedia is a mix of variants, again with the assumption that you can determine on a word by word basis what the original variant is and what needs conversion.

Anyway, Parsoid is getting the ability to do language variant conversion, but we going forward we need to be careful to accurately record the source language variant -- for example, Wikidata should really be taking appropriate care and not following Mediawiki's (bad) example.

It doesn't seems to have any task to track Chinese language variant for Wikidata. But I'm not sure. I'd be grateful if anyone can link that or create a task.

This has also been a problem for importing data to Wikidata. I'm always confused by the difference of Chinese, Simplified and Traditional Chinese there.

I think we should:

In this way, we can map all language variants to Wikidata precisely without any other rules.

I agree with @fantasticfears 's comments. Allowing user to mark a label in zh is not accurate enough. I even thought of, in an aggressive perspective, we should use zh-cn/tw/hk/mo/sg instead of plain zh-hans/hant, when specifying the label and description for an entity. After all, aside from fallbacks (e.g. zh-tw --> zh-hant), wikidata can automatically use, e.g. zh-tw label when a user request for zh-hant label, but there is no zh-hant label directly assigned to this entity.

I want to help with this. Wikibase doesn't cover this now. It's much more reasonable to fix this on their end. Maybe you can chime in and ask Wikidata people? @RHo

hi @fantasticfears, have just tagged wikidata again for their comment first, seems it was removed after the original ticket was filed fsr...

For the mobileview API, this is the method I think we'd need to update for variant support: https://github.com/wikimedia/mediawiki-extensions-MobileFrontend/blob/27599dfbdaecf1ca0a12164e648a14facefd00d2/includes/MobileFrontend.body.php#L189-L209

Should be a pretty smallish patch to MobileFrontend

@Addshore I was actually proposing storage/data model. If I have some information about how the data gets rendered from DB, I might be able to submit patches.

Should I also add iOS-app-Bugs and Wikipedia-Android-App-Backlog ? Or, is this very bug also happened on iOS?

Isn't this task to merge the entries into the single "Chinese" entry??

Seems the merging is not quite suitable because there's some matters such as different names in different region such as the title of a movie, or a drama series. 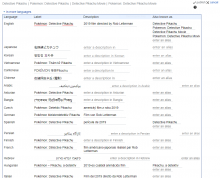 JoeWalsh removed parent tasks: T148854: Use RESTBase for zhwiki, T159985: Implement language variant support in the REST API.Jul 31 2019, 8:19 PM
Restricted Application changed the subtype of this task from "Task" to "Bug Report". · View Herald TranscriptJul 31 2019, 8:19 PM
Log In to Comment
Content licensed under Creative Commons Attribution-ShareAlike 3.0 (CC-BY-SA) unless otherwise noted; code licensed under GNU General Public License (GPL) or other open source licenses. By using this site, you agree to the Terms of Use, Privacy Policy, and Code of Conduct. · Wikimedia Foundation · Privacy Policy · Code of Conduct · Terms of Use · Disclaimer · CC-BY-SA · GPL