prefers-reduced-motion media query sees increasing operating system and browser support and should be taken into account for all user-interface transitions and animations to address people with vestibular disorder needs (global estimation of around 70 million people).

This has been discussed before in context of 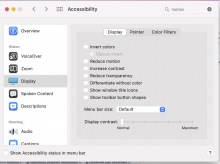 I remember there were questions about how best to implement this feature. It's available to be used in CSS directly via media query, but it can also be used by appending a class to the body via JS.

I think the JS approach might suite our needs better because it allows us to frame the feature as an assertion rather than a negation.

Appending a class like .animations-enabled, which under the hood checks for @media screen and (prefers-reduced-motion: reduce) === false has the benefit of letting us default to true even when the browser doesn't support that media-query. The downside side is that it only kicks in when JS is enabled and the page has loaded, bu on the upside, it fixes the chrome animation flash bug! T234570

This could be added in mediawiki.page.ready since that is run in all skins.

Today we discussed this ticket at the end of standup and concluded that it was a bit too nebulous in its current form so we moved it back to needs analysis. Questions that came up during the discussion:

Pushing back to the backlog until we have this @Volker_E - the problem statement is not clear right now and this doesn't seem time sensitive given our existing work on search or languages.

I'm convinced we all would be better of, with this be done on a MediaWiki core (and possible duplication on external UI lib level) with a ruleset like this, carved out in sanitize.css:

This task was closed as part of backlog upkeep. If you believe it was closed in error, please respond on the ticket.

This is an important Accessibility feature and should just be removed from Readers-Web-Backlog, not declined.

This seems like the best approach to me here. I don't see why this needs to be generalized when it can be easily added to each feature where it makes sense using a simple media query.

I'm not sure what to validate here.

https://gerrit.wikimedia.org/r/790765 is being deployed everywhere this week and will go into effect when a user has enabled the setting in their OS. One side effect I've noticed with this change is that, at least in Chrome and Safari, frames can be produced of the mobile sidebar that show it without icons/text for a short duration.

For example, the following shows a screenshot of the quirk in Chromium 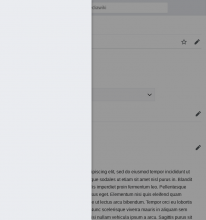 Also see https://jmp.sh/jQwLhy7 which shows the effect in Safari.