English Wikivoyage uses the concept of pagebanners and horizontal table of contents on each of its page, to alter the way the page is presented and for visual appeal.

However the current pagebanners are rendered using the pagebanner template which displays a banner image on top and strips the original TOC and replaces it with a horizontal TOC. The desktop version is visually appealing, but it does not render well on mobile as shown below: 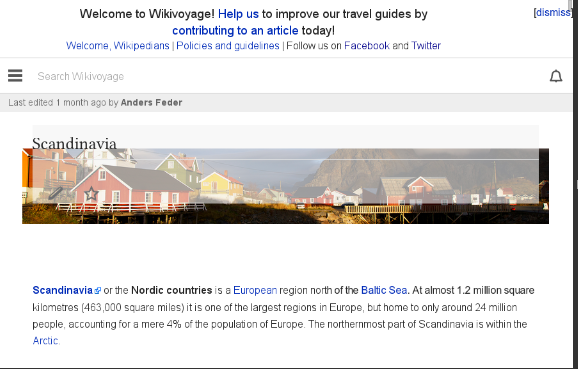 Clearly, in the mobile view, the banner is being obstructed by the edit box, and size is inappropriate In order to create a generic view, which would be consistent on both mobile and desktop as well as customizable, the proposal is to move the above functionality to a PageBanner extension, which would then be responsible for the rendering of pagebanners and a horizontal TOC on each page of wikivoyage

In order to create a generic view, which would be consistent on both mobile and desktop as well as customizable, the proposal is to move the above functionality to a PageBanner extension, which would then be responsible for the rendering of pagebanners and horizontal TOC on each page of english wikivoyage

Step 1: Create a basic banner along the lines of the template. This involves:

Add a link to the page of banner property on wikidata, in case of a need to edit the banner
Step 2: After the code for the banner generated, its important to detect the screen size of the user and resize the banner appropriately. This step is essential for mobile users, who are one of the important targets of this extension. The styling for the banner will reside inside the extension, which will determine its appearance on both mobile and desktop from a single location.
Note that this can be overridden in wiki's Common.css and Mobile.css
This talk on Mobile frontend regarding banner styling will be the starting point.
Also, implement the sub-categories feature after discussion with the wikivoyage community. A parameter switch will be provided to display the sub-categories or not

This involves putting the toc-level-1 divs in horizontal TOC and putting toc-level-2,3,4 headings as drop-downs using css and javascript by identifying them and using dom manipulation to create their own hierarchy. An example requiring this feature is this page which has a lot of sub-headings so the toc in banner is disabled. However since this is a new feature, rather including it in the extension compulsorily, it'll be as an experiment in the beginning

Step 4: Test the extension on the labs server using both wikidata value and local value of pagebanner and also the edit feature.
Step 5: Document the extension extensively for use by the wikivoyage community.

A rough design of the banner is given below: 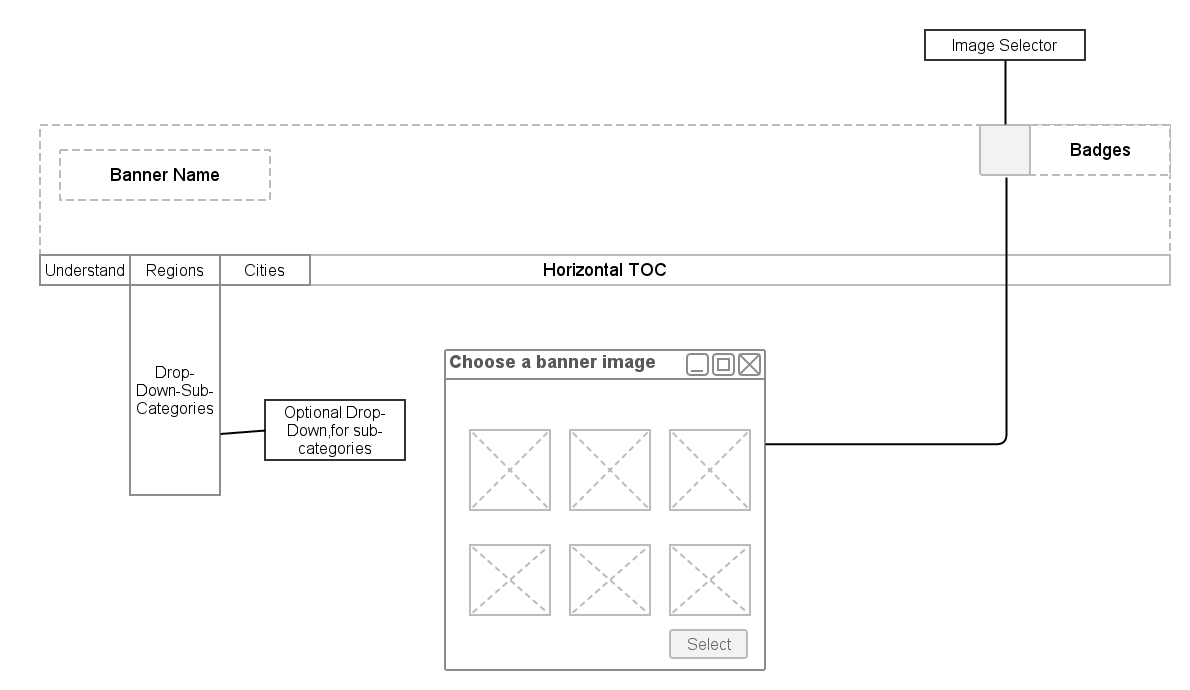 Phase I: Get a mediawiki test lab instance and create and deploy the basic version of the extension which simply displays a banner image given to it through the parser hook
Phase II: Create the lua script to fetch default banner value from wikidata
Phase III: Add banner customization options to the extension as well as styles
Phase IV: Make the banner responsive so that it renders well on Mobile View as well

Phase VI: Deploy and test the final extension on mediawiki-test labs and document the extension

I will follow the mentioned ways to go about the project:

I like to design web pages as well as do backend coding, and I'm inspired by the awesome design works out there on the web created by developers.
I had been contributing to wikimedia-mobile and was learning about the changes needed to be made for mobile users, and also looking for making some significant contributions, as being a part of something big is great!

I came across the wikivoyage banners which weren't perfect on mobile. This prompted me to follow this up. First I talked to my mentor who helped me push this project forward. Since the idea was shaping up for an extension, I looked through other issues and requirements for the banner on the banner's discussion page and on the traveller's pub and also here and also started a discussion myself here for some inputs, which helped me refine the banner's requirements in addition to the discussion and inputs from people on the phabricator page. Also these pagebanners are an important component and attraction of wikivoyage, improving which I believe could greatly benefit to wikivoyage.

Therefore I have decided to take it up. I'm looking forward to enhancing this feature to make it more awesome and also sure of delivering it.

How did you hear about the program

I heard about the program from my seniors and my friend who had been gsoc students.

Will you have any other time commitments, such as school work, another job, planned vacation, etc., during the duration of the program?

By 25th April,our summer vacation of college will start and ends by late of July; I can give my full time commitment to this project,. I assure dedication of at least 40 hours per week to the work and that I do not have any other obligations from early May till mid August.

We advise all candidates eligible to Google Summer of Code and FOSS Outreach Program for Women to apply for both programs. Are you planning to apply to both programs and, if so, with what organization(s)?

Only GSoC, for mediawiki

My open source experience began with the use of linux. However my open source contributions began with mediawiki since its based on the languages I know.In the past months I have submitted quite a few patches in core as well as in Mobile Frontend where the project aims to solve the problem and got them merged. Some are:
In core

All Gerrit contributions(past and ongoing)
Other Projects

please add your comments and feedbacks on the specifications, and help improve this :)

@Sumit, thank you for this project proposal. Have you got a chance to complete one or more microtasks? I am not the right person to evaluate your proposal, but I can tell that you have clearly put a good amount of work here, and complementing this with completed microtasks would make you a stronger candidate.

If anyone takes on the microtask associated with that and completes it I have plenty more to add and it would certainly make someone a stronger candidate in my eyes.

I've setup the boilerplate extension on my userspace at github, now filling in a request at https://www.mediawiki.org/wiki/Gerrit/New_repositories for migrating this to gerrit for further development
https://github.com/codez266/WikiDataPageBannerExtension

Wikivoyage in what language? What language editions have been contacted about this proposal?

Please edit this task's description to fix the typos in your proposal.

Wikivoyage in what language? What language editions have been contacted about this proposal?

I'm not sure of all notifications that have been done, but I've seen feedback solicited in the English Wikivoyage pub (https://en.wikivoyage.org/wiki/Wikivoyage:Travellers%27_pub#Pagebanner_extension_for_wikivoyage), and I posted a link to the phabricator discussion on the Wikivoyage page on meta so that other languages would be notified (https://meta.wikimedia.org/wiki/Wikivoyage/Lounge#Pagebanner_extension).

@Wrh2 thanks for sharing the links and @Nemo_bis thanks for the poke, super keen to set @Sumit up for success!

Hey, I have a few suggestions to your proposal:

@Bene, thanks for your suggestions. Just a small view regarding:

Concerning the edit box, as it should also be possible to edit Wikidata in this box, please work closely with the Wikidata team for that feature.

I'm not sure if we need an edit widget for changes to the wikitext variable, maybe something that hooks into VisualEditor would be nice like it is done for {{DISPLAYTITLE}} already.

Changing the value on Wikidata requries more investigation because it will affect all wikis which have an article about that topic and are linked to Wikidata. I'm not sure how to find a nice solution here. I think you should focus on a VisualEditor integration and leave the Wikidata remote editing as a todo for later if there is still time left.

I'm still not seeing which Wikivoyage edition(s) volunteered to test/adopt this extension.

@Sumit my opinion on Phase V: I think you should de-scope this from your GSoc proposal. {{PAGEBANNER}} should be completely optional and simply used for overriding the value from Wikidata. For this reason I think an editor might not make sense here as a first version. Clicking an "Edit on Wikidata" link might suffice. It would be far better to have a generic image selector on Wikidata itself or fallback to VE. I really think the phases before it are ample work for a GSoc project already :-)

@Jdlrobson, descoped the "editing of banner image source using UI" part of the proposal as per your suggestion.

@Qgil, since we are asking students to keep their proposal task as their "Detailed plan with mentors" in T94166 I don't think we should be closing these as resolved yet.

It's actually better to use an img and use the srcset attribute. This is how we should configure the size of the image. I've suggested @Sumit switches back to using an img tag