Audit use of @embed and remove where not needed (2019)
Closed, ResolvedPublic
Actions

This task proposes to focus on the following theme for a quarter: Reduce use of @embed to only images that generally render above-the-fold.

Expected impact, based on "Size of stylesheets" at https://www.mediawiki.org/wiki/Wikimedia_Performance_Team/Page_load_performance:

Smaller stylesheets download quicker. The sooner the styles arrive to completion, the sooner the browser is allowed to start rendering the above-the-fold HTML it already got in its buffer.

In 2010, we decided to embed images because of:

Embedding images allowed the images to act like a super-sprite in terms of compression (saving on bytes transferred) and reduced the number of requests (fewer roundtrips, thus faster page load time). Between then and 2019, some things have changed:

The way browsers work, and have worked even in 2010, is that a stylesheet blocks the appearance of any content or layout on the page. The flow is as follows:

By embedding icons in stylesheets, no page content, text, or layout may appear until all icons are downloaded. This is in essence a sort of "ultra high priority" hack, analogous to synchronous scripts (and we know how much we don't like synchronous scripts). The use of embedding is therefore imho unacceptable, without exception. No icon can be more important than the layout of the website, and the article text itself.

By letting our icons load separately (in parallel with preload) I hope that the first paint (above-the-fold content and layout) can occur sooner than today.

The paint with the icons would still be at the same time as today, in browsers supporting Preload. In other browsers (shrinking population over time) icons would appear 1 RTT later than today, but still before the load event, given other loadevent-tracked sub resources taking at least 2 RTT as well.

In retrospect, this isn't really anything new. Most any major site today works the same way. GitHub, Google properties, Twitter, Facebook. They load at once with content and layout in their final resting place, but icons pop in later. Unlike layout FOUCs, these seem quite acceptable and not fundamentally different to how other images render in a browser. That is, the website logo or infobox images also appear separate from the text. Same for native applications as well.

(Pushed to next quarter)

From the netinfo API (spec). For two dates in June and July 2019 (data only available for Android devices and Chrome desktop).

Change 525840 had a related patch set uploaded (by Krinkle; owner: Krinkle):
[mediawiki/core@master] [WIP] resources: Remove @embed where it may do more harm than good

Currently loads ~ 2KB as blocking/embedded images. 6 icons (2KB) logged-out, and 8 icons (2.6KB) when logged-in. Most of them seem to be for the navigation menu, which is actually hidden by default. Probably not worth embedding / delaying the rendering of articles for.

The only icon not for the menu is the chevron arrow, which is used in the last-modified footer at the end of the page (far below the fold), also doesn't seem beneficial to embed. 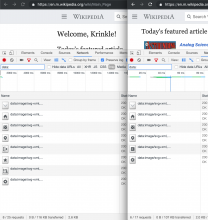 Change 342661 restored by Krinkle:
Remove @embed for image not used during page load

Change 532098 had a related patch set uploaded (by Krinkle; owner: Krinkle):
[mediawiki/extensions/MultimediaViewer@master] [WIP] Remove @embed where it needlessly delays loading of the UI

Reason:
Nevermind. It's easy to revert if the result is negative. Might as well switch all at once centrally through the mixin.

Change 532098 merged by Krinkle:
[mediawiki/extensions/MultimediaViewer@master] Remove @embed where it needlessly delays loading of the UI

Change 525840 merged by jenkins-bot:
[mediawiki/core@master] resources: Remove @embed where it may do more harm than good

Change 540248 had a related patch set uploaded (by Krinkle; owner: Krinkle):
[mediawiki/core@wmf/1.34.0-wmf.25] resources: Remove @embed where it may do more harm than good

Dashboard links for past week to compare:

Reduce use of @embed to only images that generally render above-the-fold.

@Krinkle hmm. I didn't even know about this.. Shouldn't the pages in mediawiki.org be updated to reflect this new @embed practice ?