^ this list of a-z links appears to be the culprit

Unfortunately because we allow editors to put in some non-mobile friendly css, particularly with templates, this may be out of the app's scope to fix.

Where we can easily fix it, though, we should.

Looks like there are a couple of things going on here. 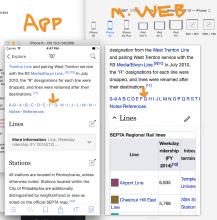 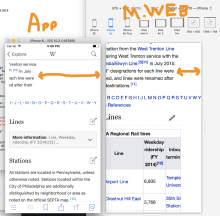 I looked into why the app CSS for these lists is different than mobile web and I think I know what's going on.

When we run "make css" we pull upstream css. However the CSS url we fetch from...

...actually comes from the "MobileApp" extension.

The MobileApp extension gives us the upstream CSS, but also CSS from a few "mobile.app.pagestyles.ios" files.

The problem is, I think, mostly with the enwiki.less file. It has accrued some crufty CSS which produces a fairly large delta against the upstream CSS which could explain some of the more confusing issues we've ran into which don't always seem to effect mobile web. This line in "enwiki.less" is causing the "A B C D..." width issue noted above.

I think the iOS app should deprecate pulling CSS from the mobile app extension and instead directly pull mobile web CSS without this "enwiki.less" delta. It would do this at build time, or rather, when we run "make css", as it does now. Deprecating the mobile app extension would require us to audit what breaks without the "enwiki.less" delta (such as the edit button, which seemed to break when I tested this). We'd then have to add any truly necessary iOS workarounds to our "web/less/misc.less" file (which gets gruntified to "assets/stylesoverrides.css" when we run "make grunt").

I think there are a couple benefits to more directly ingesting mobile web's CSS (w/o MobileApp's "enwiki.less" delta):

@JMinor: The previous comments don't explain what/who exactly this task is stalled on ("If a report is waiting for further input (e.g. from its reporter or a third party) and can currently not be acted on"). Hence resetting task status.

This task has been assigned to the same task owner for more than two years. Resetting task assignee due to inactivity, to decrease task cookie-licking and to get a slightly more realistic overview of plans. Please feel free to assign this task to yourself again if you still realistically work or plan to work on this task - it would be welcome!

For tips how to manage individual work in Phabricator (noisy notifications, lists of task, etc.), see https://phabricator.wikimedia.org/T228575#6237124 for available options.
(For the records, two emails were sent to assignee addresses before resetting assignees. See T228575 for more info and for potential feedback. Thanks!)

This task was closed as part of the iOS team backlog grooming.