Allow users to be blocked from uploading files only
Closed, ResolvedPublicFeature
Actions

There are some problematic users who continually violate file upload policies & guidelines, but should otherwise be retained on the wiki as constructive contributors. A sitewide block is not an appropriate way to handle these situations.

It would be useful to be able to *only* block users from uploading files.

Allowing them to keep editing allows them to contact people who can help explain copyright issues to them and shouldn't cause the same outrage that sitewide blocking tends to. 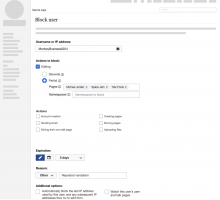 Duplicates Merged Here
T104099: Allow users to be blocked from using Special:EmailUser only

I've updated the ticket to include acceptance criteria. There are still some details that need to be filled in (what do the error messages look like in the editors? what do the log entries look like?)

The Anti-Harassment Tools team will take this ticket on in the coming months, after T2674: Allow users to be blocked from editing a specific article or all articles inside a namespace is complete.

I still need to test what the error messages are in the VE and Upload Wizard when a user is blocked.

If a user is blocked but uses the VisualEditor to upload a file, this is the error message that displays. 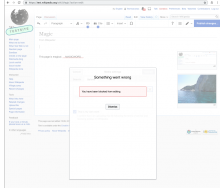 The message is minimal and doesn't represent the full details of the blocks. We should probably update it, but we first need to determine the complexity of operating in the VE code base.

Alternatively, there is this message, which could be emulated for partially blocked users:

Some thoughts/opinions on the behavior of the checkbox:

Ping @Prtksxna to review this ticket and share his opinion on my proposed acceptance criteria.

I agree, when the block is partial the user should have to explicitly mark all the things that the user is blocked from.

Yeah, unchecking the Uploading files option if the user switches to Sitewide isn't helpful. I have two questions around this though:

Yeah, unchecking the Uploading files option if the user switches to Sitewide isn't helpful. I have two questions around this though:

Yep, we don't use that pattern anywhere else, was just wondering if we considered it for this. Happy to go ahead the way it is 🙂

This will require database changes. Putting on hold until we see that Partial Blocks are effective/impactful.

Deprioritizing new feature development on Partial Blocks in 2019 by the WMF's Anti-Harassment team but leaving open on the Blocking Tools backlog. After we measure the effectiveness of page and namespace Partial Blocks we will reassess additional time investment.

@Niharika any objections from Anti-Harassment / is this approved from a product point of view?

@DannyS712 Can I ask you to leave this and other Partial-blocks related tasks alone for a little while, while I go over them and make myself familiar with them? I was not the product manager when this project was being worked on and I need some time to understand them and prioritize them.
Thank you for your understanding.

@DannyS712 Can I ask you to leave this and other Partial-blocks related tasks alone for a little while, while I go over them and make myself familiar with them? I was not the product manager when this project was being worked on and I need some time to understand them and prioritize them.
Thank you for your understanding.

Sure; can you include T194529: Allow a user to be blocked from moving/renaming pages in your tasks to look over? I just claimed it, but will wait until approval before proceeding

Done as part of T279556: Introduce infrastructure for making partial blocks against actions. @dom_walden this will be good to QA once the relevant patches have been merged.

Blocking a user from uploading files blocks them from:

But not from any other action (that I tested).

I tested this for single and composite blocks and system blocks (the latter tested on my local docker).

Otherwise, I checked that previous blocking behaviour with respect to file uploads still occurs. You are blocked from uploading files if you are blocked sitewide or from the File namespace.

I checked that the new parameter is added and removed from the ipblocks_restrictions table as appropriate when adding/removing/editing blocks.

I also checked that rows are purged from the same table after the block has expired (after performing an action like adding a new block).

I wanted to test the scenario where, after having $wgEnablePartialActionBlocks enabled for a while, we have to turn it off for some reason. After we turn it off:

Throughout testing I kept an eye on beta logs. I could see no errors associated with our work.

For this, I did not test:

N.B. I think I have covered all the ways to upload a file, but I am not sure. For example, I tried to use Special:Import to import an image from Commons. However, although it created the page in the File namespace, it did not upload the image (and reading https://www.mediawiki.org/wiki/Manual:Importing_XML_dumps, I don't think you can import images). A user has to have special rights to do this anyway, which could be removed from a blocked user.

EDIT I also briefly tested reuploading an already uploaded file. When blocked, I was not able to via Special:Upload, API:Upload (although I don't think it supports this anyway) or SVG Translate.

Test wiki on Patch Demo by TChan (WMF) using patch(es) linked to this task was deleted: