It should be easy to make a microsurvey question go away, without answering it
Closed, ResolvedPublic3 Estimated Story Points
Actions

Microsurvey questions should appear instantly/when the page loads, but they should also be very easy to remove without answering. We probably want a small "Cancel" button as well as an (x) button on the box (maybe next to the privacy link), so that it will be very obvious that the box can be closed without answering the question.

This patch is about the behavior and design of the X close button, not about the buttons or the rest of the survey box

Removing MediaWiki-Page-editing so that this doesn't clutter searches related to actually editing pages in MediaWiki. This project should only be on the parent task, probably (T89970). [batch edit]

These are some of the early explorations on how we could enable users to dismiss a survey without providing an answer. These options include a close "x" button, a close banner, and different positioning and layout approaches.

Taking all of this into account we further explored option 000. In order to better separate the content of the survey from the additional interactions such as the close button we are going to use the same close button as the popup component. 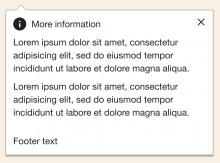 If we think this is a valuable solution we'll go forward and prepare the redlines for implementation.

Looks good to me. The only thing I'd highlight (more on the design front than the engineering one) is that the spacing is inconsistent with the popup content.

To illustrate what I mean: 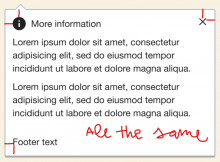 In this one 👆 the spacing is all the same across the whole popup, including the X to close.

And in the QuickSurvey mockup the X and its bounding box have different spacing to the survey container than the rest of the elements in the container (unlike the referenced popup).

This is not a problem per se, just wanted to highlight it in case it wasn't intentional, and if it is intentional then we would need what the spacing is supposed to be so that it makes sense and we don't make it up.

Details for the implementation side: QuickSurveys uses WVUI, and this is how they would look like: https://doc.wikimedia.org/wvui/master/ui/?path=/story/components-button--configurable&args=type:quiet;default:;icon:wvuiIconClose;disabled:false The bounding box isn't square, and the background + borders are different from the mockups.

There are also plain icons https://doc.wikimedia.org/wvui/master/ui/?path=/story/components-icon--configurable&args=icon:wvuiIconClose that we could use to construct our own button for this case, but I'm not sure how good of an idea that would be.

Initially the x button position was intentional (I was afraid that the button was too close to the survey question and might creating some confusion: am I dismissing the survey or am I answering it) but after talking with Pau this morning we opted for a different solution, more aligned with the overall layout.

I check the (quiet) button component from WVUI and it may be too prominent for our needs.

I also noticed that in our design Figma library we have a (quiet) icon-only button which is not available in WVUI at the moment. It's a square button instead of a rectangular one. But also in this case I believe that this button (32x32px) is too prominent for our needs.

That is why I opted for the x button from the popup component, which it is uses a 14x14px icon. But the x button in the popup has no bounding box nor states in the design Figma library so I added a bounding box and the necessary interaction states (default, hover, active, focused). In this case the icon cointainer would be a 24x24px button.

These are the proposed specs, do you know @Jhernandez how we can propose new additions to the WVUI? I can also ping Volker if necessary.

Colors for icon fill, hover, active and focused states follow the same patters as the other buttons in the WVUI. If we need those colors specified also here I'll gladly add them.

I love reading the process and options, thanks for taking the time!

>
Colors for icon fill, hover, active and focused states follow the same patters as the other buttons in the WVUI. If we need those colors specified also here I'll gladly add them.

Can we add these to the task description? Looking solid to me.

These are the proposed specs, do you know @Jhernandez how we can propose new additions to the WVUI? I can also ping Volker if necessary.

I have no idea about how this works. I know they are working on another new library but that is not ready so the options are:

I think getting input from Volker would be helpful to know where we stand at this moment.

@Volker_E do you recommend we add something to WVUI? Or we build something custom for QuickSurveys on top of WVUI? Or use something else?

Thanks @Jhernandez! Here's the specs for the different icon states:

For QA for this ticket, we only care about the "X" button's position and spacing of that. Nothing else.

I'm going to start working on this today

@aminalhazwani Do you want the survey title to wrap around the X if it is very long? (like the one in the example survey) or do you want the X to take all the vertical space in the title?

@aminalhazwani The last row on the table with the designs is focus not hover right?

@aminalhazwani Do you want the survey title to wrap around the X if it is very long? (like the one in the example survey) or do you want the X to take all the vertical space in the title?

The X taking all the vertical space for the title only. 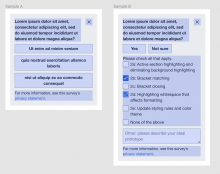 @aminalhazwani The last row on the table with the designs is focus not hover right?

Yes, that is a typo, thanks for catching that! I fixed it both in the description and in the comment above.

@Jhernandez I have a question on the patch. It might need to be stepped back because I notice the hover state it's quite like the mockups.

@aminalhazwani said he's going to check what other parts of the product use quiet buttons in non-white backgrounds to see how we should proceed.

I did some investigation in product and I found two different implementations of the rule defined in the .less file.

I pinged Volker last week but I would not want this to be a potential blocker. With all things consider we could keep the color that comes from the from the wikimedia-ui-base @background-color-quiet--hoverand change it later if the design team opts for a different approach.

@aminalhazwani to confirm--you're asking to keep the patch as is, correct?

@aminalhazwani to confirm--you're asking to keep the patch as is, correct?

@mepps, I thought this task couldn't be moved to QA until ticket 'T293798 QA needs a Quick Survey test environment on beta' was completed?

I have spoken with @mepps, and will move this ticket back to Review/Feedback until ticket 'T293798 QA needs a Quick Survey test environment on beta' is completed.

Since this issue is more of a cosmetic issue and is not something that effects the functionality or behavior of the ‘X’ button, and no other issues have been found during my testing, this ticket will be pushed to Product Sign Off…

Below are some screenshots of new code changes on various devices and browser:
(NOTE: please disregard blurriness of screenshots, this is due to device simulation and is not related to the code changes):

Looks good functionality wise. Additional ticket for padding issue has been filed but since this is a minor issue I'm marking this as Resolved.