This will probably be highly unpopular at nowiki but the site id and the subdomain should be changed. Correct site id would be nbwiki and subdomain would be nb.

Per discussion on T21986 a site identifier change is unlikely in the near future. We could change the subdomain if the communities of the relevant Wikipedias really want it.

The discussion on T19047 is pretty descriptive, situation is very hostile, but what oddeivind said is correct. The no code covers both nband nn but nowiki only supports nb. Riksmål is not an official language form and has virtually gone out of use, even if some users at nowiki claim they use it. Close scrutiny of what they write onsite makes it very clear that they do not write Riksmål, they write whats called "moderate Bokmål".

This request is only for change of nowiki, possibly only the subdomain as that is the primary cause for the continued fighting between nnwiki and nowiki.

The project nowikinews is a dead and should be closed. People from both nnwiki and nowiki tried to get it going, and a lot of templates and other onsite structures was built to support both Nynorsk and Bokmål. After a while people started to disagree and the project become quite hostile. Now it is mostly just trolling going on there. Closing it is another issue, and should not be discussed here.

Projects that are alive and use both Bokmål and Nynorsk could continue using the no subdomain, but projects that only use Bokmål should use nb.

Please be advised, there is no consensus at nowiki for this change and earlier discussions has always "landed" on "remain at nowiki". The last big vote we did on this was in 2009 with a clear result for "stay at the no-prefix". Please see https://no.wikipedia.org/wiki/Wikipedia:Avstemninger/Prefiks for that vote. Since then nothing new has happened really and every new flare-up of "let's change no to nb" has been quenched:
https://no.wikipedia.org/wiki/Wikipedia:Tinget/Arkiv/2011-35#no._vs._nb.
https://meta.wikimedia.org/wiki/Requests_for_new_languages/Wikipedia_Norsk_(bokm%C3%A5l)

The OP's sudden need to expedite a change without any consensus or community-backed effort is really out of order. If and when we decide to go forth with requesting a prefix-change, it will be backed by the community either by consensus or a vote.

This is not something nowiki can decide on alone, it is a misrepresentation of what the subdomain should contain. The code no is simply not correct, and whether people from nowiki claim something else does not make that claim any more correct. (Argumentum ad populum) There are two projects with to language codes, and one of them imply that the site includes the other, which it doesn't do.

The code no should either be used as a common portal of some kind, or not be used at all, and nowiki should be moved to nb.wikipedia.org.

Given the uncertainty here around who needs to agree to such a thing, I'm going to add the tag. And given the multi-site nature of the issue it most likely needs a discussion on meta involving enough people from each site.

Moved the page on Meta to Requests for comment/Rename no.wikipedia to nb.wikipedia. That should give everyone an opportunity to say whatever they want.

As I said, it is highly unpopular, but the language code is wrong and should be changed. Add your factual statements at the page on meta.

nowiki at https://no.wikipedia.org/wiki/Wikipedia:Tinget manage no.wikipedia.org and that is NOT wrong. A more detailed response to this here https://meta.wikimedia.org/w/index.php?title=Talk:Requests_for_comment/Rename_no.wikipedia_to_nb.wikipedia&diff=prev&oldid=15960603

Per other wiki renaming candidates

There are three projects that has a legitimate use of the no-code as they are bilingual; Wikinews (n:Wikinytt:Målnøytralitet-nb), Wikibooks (b:Wikibøker:Språkform), and Wikisource (s:Wikikilden:Hva er Wikikilden?#Språk og oversettelser).

As an administrator at Nynorsk Wikipedia I highly agree on this change.
This is correct according to all official registers.

According to Profors at https://nb.wikipedia.org/w/index.php?title=Wikipedia:Torget&oldid=17735096 A Redirect from no to nb is necessary. When this is done, all current functionality will continue to work. (as the redirect from nb to no works today).

The most important issue right now is the Interwiki in WikiData to change from no: to nb:. 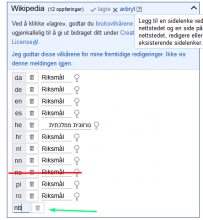 Disclaimer: I'm writing this as a Nynorsk Wikiepda Wikipedian and Administrator. I'm Hogne Neteland, also chair of Wikimedia Norway, but this issue is not discussed in the Board nor the Organisation, and therefore this is not anything I can argue for as chair!

There has been a new, and quite confusing vote at nowiki. It can be found at Ny avstemming om nb.wikipedia.org (New voting about nb.wikipedia.org) and the outcome at Avstemning (nb/no) (Voting (nb/no)) with an actual outcome of 23 for the change and 9 against. Three users have publicly abstained from casting a vote.

I believe the change is no longer blocked by the earlier voting from 2009.

There has been a new, and quite confusing vote at nowiki. It can be found at Ny avstemming om nb.wikipedia.org (New voting about nb.wikipedia.org) and the outcome at Avstemning (nb/no) (Voting (nb/no)) with an actual outcome of 23 for the change and 9 against. Three users have publicly abstained from casting a vote.

I believe the change is no longer blocked by the earlier voting from 2009.

Good point! So maybe the Community-consensus-needed can be removed?

There are no Community consensus regarding this issue. The discussion Ny avstemming om nb.wikipedia.org https://no.wikipedia.org/w/index.php?title=Wikipedia:Tinget&oldid=17916119#Ny_avstemning_om_nb.wikipedia.org was about a lot of different issues. With no clear consensus even about what we where discussing. ~~~~

In a way you're right, I'm afraid. I can see two paths to the nowiki project putting this matter behind it: Complete unanimity (never gonna happen), or a full resolution of the issue (seems to be far off in the future). Any progress towards consensus seems to decay over time, causing endless rehashes of this tiresome debate. Sometimes it feels like a purgatory. Still, in a never ending train wreck kind of way, I must admit it's kinda fascinating to watch.

Voting on Meta after a RfC was in favor, and voting on nowiki was in favor. Task is thus not stalled. (@Liuxinyu970226 )

In my opinion the tag Community-consensus-needed can be removed (@Krenair), and the project renamed when the scripts are in place.

@jeblad, the vote above is no consensus and it was related to the change from norsk (bokmål) to only norsk in the language section to the left (even got some media attention from a nn language newspaper https://framtida.no/2017/10/27/wikipedia-far-nynorsk-til-a-framsta-som-noko-mindreverdig), done here without consulting the no.wikipedia.org community: https://phabricator.wikimedia.org/rMW0d82d154476bbc6adbd015072c6c90616ea8cdea Eventually revert this and not change the prefix for our beloved no.wikimedia.org project.

What the voting was about should be clear enough.

The language code and its implications are discussed at T174160: Language code(s) for nowiki should be changed to nb, and the newspaper article is about that issue.

@Nsaa Your suggestion to revert rMW0d82d154476b can result this problem: Currently there are nowikibooks, nowikinews, nowikisource, and Norwegian test-Wikivoyage on Incubator existing for both Bokmål and Nynorsk users, your behavior will result these projects to be "forced to Bokmål only", which is inacceptable under ISO 639-3 and CLDR keystone rules.

You should obey that standard when writing bot scripts, otherwise your bot can't work at all.

Anyway, even the de facto nowiki has Riksmal articles, it won't be hurted when renaming domain, afaik nothing will be lost by renaming, that will result some extensions problems but they're fixable.