When you create a new bug report in Bugzilla, you get a list of possible duplicates. I find it useful. It might be even more useful for new users filing what is going to be probably an obvious duplicate.

Your feedback upstream is welcome:

"There's some discussion of this in T397. In short:

We had a feature like this at Facebook.
But, it seemed to be nearly useless.
It has seemed useless to me in every other system that I've filed a bug and been given duplicates, too.
For example, T397 is a duplicate here, but uses different words for everything -- "consider" instead of "suggest/propose", "dedupe" instead of "duplicates", "bugs" instead of "task": basic title-based search would not have found it. My experience was that this was the norm.

Do you have any data about how effective this feature really is for your install?

I'm not totally opposed to pursuing this, but I worry that it doesn't actually work, or works so poorly that it's worse on the balance. I'd like to see data (or, at least, hear experiences) showing that it works well.

Particularly, the cost of a false positive (a user incorrectly believes they have found a duplicate) is higher than the cost of a false negative (a user incorrectly believes their bug is unique) since mechanically merging issues is easy but mechanically separating them is difficult. Generally, our strategy for dealing with this is currently "make merging cheap and easy"."

I think the usefulness of proposed duplicates really depends on the search algorithm used in the backend, and I don't know enough neither about Bugzilla's nor Phabricator's and I cannot judge if Bugzilla's duplicate search is good or bad as I miss comparisons.

Slightly offtopic: In my perfect world which is 10 years away, I'd expect duplicate proposals to prefer existing tickets filed under the same project over tickets in other projects, stemming entered words (duplicat*), covering spelling differences in English variants ("colour" vs "color") and potentially using an English language thesaurus ("delete" and "remove"). This touches Natural Language Processing (NLP) and while there are tons of research papers on this topic, I still have to see a real implementation in any bugtracker. Maybe I'm just not aware of an implementation example.

I find it hard to imagine how to gather meaningful statistics on the use in our Bugzilla given our rather small audience in general :-).

I wouldn't subscribe to that false positives are a hindrance here; users are supposed to search for duplicates anyhow, so they might assume a false duplicate without the convenience of an auto-search as well.

I propose to not make this block Day 1 in production. It might be nice to have but we will also survive without: We might receive a higher amount of duplicates that need to get triaged compared to Wikimedia Bugzilla nowadays.
We have no statistics to base this assumption on, and neither how many people look at duplicate proposals, or how many people consider these proposals useful. Anecdotal too: I am aware of some users who do try to find a ticket first about the issue they want to report (in order to avoid creating a duplicate) but they are sometimes unsuccessful to find the entry in Bugzilla.

I propose to not make this block Day 1 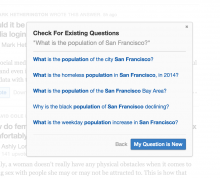 Screenshot of how Quora handles this.

Screenshot of how Bugzilla handles this.

Imagine a world where James Forrester spends his day just marking my tasks here as duplicate.

This project is selected for the Developer-Wishlist voting round and will be added to a MediaWiki page very soon. To the subscribers, or proposer of this task: please help modify the task description: add a brief summary (10-12 lines) of the problem that this proposal raises, topics discussed in the comments, and a proposed solution (if there is any yet). Remember to add a header with a title "Description," to your content. Please do so before February 5th, 12:00 pm UTC.

If we did https://secure.phabricator.com/T7805 first and got a generic ApplicationSearch endpoint out of it, I'd be open to writing this as an extension CustomField and then disavowing all knowledge of it. The results UI wouldn't be custom, but maybe that's fine. We might need to pay down some infrastructure debt to let installs put this immediately underneath the "Title" field, I think a couple of the fields are still hard-coded.

This suggestion got the most votes in the Developer Wishlist (with a quite confident lead). @Qgil @greg is either of you interested in making this an official WMF goal?

I'm already working on phabricator search stuff so this is not that far out of scope...

@mmodell @greg I am assuming that you have this ball in your court. If you think that sponsoring the development of this feature might help, please let me know. Depending on the cost, we might be able to cover it during this fiscal year (before the end of June).

(I still would like to see the completion of T136213 before jumping on new funded tasks, though).

Thinking through the ways of addressing this. Will post more when we're ready to commit :)

But seriously, not on RelEng's radar (and our Q2 goals are already fleshed out and too many ;) ). Looks like not on upstream's current plans either (based on lack of updates there).

We really need this. I just merged the seventh duplicate task of T259565, and they were all created in a span of few hours, some just minutes apart. It would really be good if Phabricator is to be smarter on this end. (I was about to create duplicate of this task too, before recalling that I saw something like this.)

Is now a good time to reconsider low? The lack of this does create a lot of work for triaging bugs and managing fragmented conversations - in particular for user facing products

As long as I neither see a good NLP / AI algorithm for the English language (more relevant to me) nor much research that an implementation to suggest potential duplicates significantly lowers the number of created duplicates (less relevant to me) this feels low/lowest priority to me. Maybe it's just my usually disappointing personal (anecdotal) experience in Gitlab and Bugzilla instances with such "proposals" which makes me relucant.
An algorithm might be way more successful if it gave way more weight to recently created (or edited?) tickets, I guess?
In any case, regarding WMF I doubt that there are currently resources to tackle such a huge project. :-/ Feels like upstream territory.

I just merged the seventh duplicate task of T259565

Looking at the task summary I have problems to find language based patterns that would have allowed proposing the "right" existing ticket.
I see the root parse three times, I see the word flow in two ticket summaries, four times mobile, and history in five. Hmm. Some cross-matching but still quite mixed for having 10 items in the pool.

Thank you for the honesty!

Maybe we could do something as simple as showing a list of all the most recently submitted tasks on the submission page? That might catch some things.

Maybe we could do something as simple as showing a list of all the most recently submitted tasks on the submission page? That might catch some things.

I don't think many people want to get a list of 50 tasks into their face and then spend time reading that list every single time.
It might catch a few things.
It will also condition basically everybody to scream and quickly scroll down.

Any changes that would make this possible? ^_^

See my previous comments here; has some situation changed, or have new arguments arisen?