Notifications are organised in two big categories: alerts and messages. According to @DannyH and @Quiddity, these groups represent different priorities. While alerts represent actions very directly connected with the user (e.g., the user being mentioned or thanked) while messages can represent new activity of interest for the user (e.g., someone replied to a conversation you are following).

Active editors may benefit from being able to identify the kind of new notifications they receive before opening the notification panel. In that way, they can react immediately to alerts while not getting distracted by new messages they can reply to later.

It is worth considering that we don't want to add additional complexity for those users who are getting a low volume of notifications (and may be able to react to them as they come).

Although this may result in a small change, since it is an always visible element users make repeated use of it for their daily work, I would strongly recommend testing the idea well before it is delivered to our users.

We expect the change to result in a reduction of the ignored alerts. Thus, it would be great to measure changes in that regard (T108208).

Mockups:
When there are no unread notifications, both badges are visible but with low prominence:

When there are new alerts, they are highlighted in red. The alert badge will become grey once the notification panel is open.:

When there are new messages, they are highlighted in blue. While still noticeable, a user getting notifications frequent may feel less pressured to respond to them immediately while still aware of the new activity.

When there are both new alerts and messages, alerts are highlighted in red and messages in blue. The response time for opening alerts is expected to be lower for users, so it makes sense to present them more prominently:

We need to adjust the notification panels. Instead of having the choice between alerts and messages we are presenting just one kind of information. We may need to make it clear what the panel is about to avid confusion (e.g., by adding the icon and presenting the text as a title for the panel): 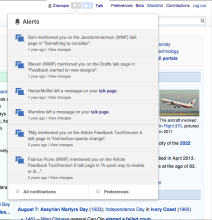 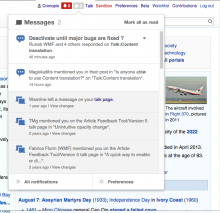 Yeah, we talked about this more in today's team meeting, and we feel confident in moving ahead with the two-badge solution. If we want to play more with colors, then we can always do that later. @Trizek-WMF's suggestion about orange might work. Pau's away for the next couple weeks, but I'm sure he'll have ideas and opinions when he comes back. :)

Change 231200 had a related patch set uploaded (by Mooeypoo):
[wip] Split alerts and messages in Echo

I proposed to use blue to highlight messages, to avoid presenting them as a problem that needs immediate attention by the user to be solve. We should definitely evaluate that the standard blue is enough to make the user aware of messages without creating any anxiety for not being able to reply to them immediately.

Due to the particularities of this kind of interaction (e.g., notifications happening asynchronously while the user performs other actions, contrast produced by colour change of counters that are disabled most of the time, repetition of actions and the effects of muscle memory, etc.) it is hard to evaluate the idea merely on static mockups. I strongly recommend both observing the user behaviour in a controlled setting that reproduces a problematic situation we are trying to solve and measuring the obtained benefits for this change:

Given where we are in the quarter, we don't have time to do any more testing on current Flow functionality. This notification split is a blocker for enabling opt-in, because I don't want to spread opt-in too widely without fixing this notifications problem. There are also some other design questions that are more pressing for this week.

So -- we need to get this out the door. The color that Moriel is using is fine; let's use it. The JS/no-JS problem is annoying but not a blocker for release.

The real blocker at the moment is the bug that's occasionally making the notification count inaccurate.

Moriel is still working on a bug in the number that's displayed, which is a real blocker.

Given where we are in the quarter, we don't have time to do any more testing on current Flow functionality. This notification split is a blocker for enabling opt-in, because I don't want to spread opt-in too widely without fixing this notifications problem.

Ok. One option to consider would be to make this change also part of the Flow opt-in beta feature in order to provide a more gradual deployment (while making sure that users that opted-in to Flow are getting the new system).

I don't know how much effort that would represent, so the decision on whether that fits in our current available effort is up to you, but we need to consider that deploying this everywhere at once may result in feedback that also requires effort to deal with.

I reviewed the current patchset, adjusted the styling and added some more comments to it. The result is shown below:

The main issue I found is in the notification panel, where the icon next to the title is invisible (technically there is a white icon over a white background before "Messages" title):

Change 231200 merged by jenkins-bot:
Split alerts and messages in Echo

I just saw this at http://en.wikipedia.beta.wmflabs.org , very nice! Some unrequested drive-by feedback :) :

Thanks for the feedback @Spage. Regarding the alignment, I did some adjustments in the CSS (as illustrated in T108190#1575579), but I'm not sure if those got lost in the patchset iterations or the resulting CSS is being overwritten by other CSS rules in production.

@Pginer-WMF We rearranged the less file after your fix and added LESS variables, organized for better nesting and removed duplication. I was fairly sure we kept your changes, but I will go over it again and see if I can retrace them.

@Spage thanks for the feedback! Let me go with the points:

Change 236691 had a related patch set uploaded (by Mooeypoo):
Add a tooltip to the notification badges

https://lists.wikimedia.org/pipermail/wikitech-ambassadors/2015-September/001253.html is the announcement sent to tech ambassadors.

Change 236691 merged by jenkins-bot:
Add a tooltip to the notification badges

Change 236956 had a related patch set uploaded (by Mooeypoo):
Add a tooltip to the notification badges

Change 236956 merged by jenkins-bot:
Add a tooltip to the notification badges

In case you want some feedback on this: I personally find the spacing to be somewhat excessive (especially in Monobook) and it looks particularly ugly in Monobook with black icons next to a white number on a grey background.

The colors of the badge + the closeness of the two badges are design issues I leave for @Pginer-WMF to decide. I am not sure I know how to fix this (or even if it is needed)

Regarding the item separation, I agree it needs some adjustment. Conceptually both badges are more closely related to each other (and probably to the user) than to the rest of the concepts of the menu. So it makes sense to better connect them together. I'll try to adjust the styling to find the right values.

I have uploaded a patchset to reduce the distance between badges.

I read the task description and some early replies, and only a glance of all the other messages.

The notification on this shot has mixed associations. Looking at this the first time it wasn't immediately obvious what these notifications mean or what kind of notification they contain.

This can be solved with making sure the notifications associated to a link, or non-association, is obvious with adequate space. Or reusing the links on the bar like you mentioned @Pginer-WMF. Perhaps the first notification can be combined with the user icon like..:

Here's a quick sketch below on how the colors could look like and how the associations could be improved. The idea here is to have Username and Talk preserve their own link destinations and the notification buttons invoke a list of notifications, while showing them as a unit. On the blue color note to make it not so called-out, you might be able to get away with just using gray when there's notifications vs. white when there is none. Since it's already a button, it already has an obvious presence on the top bar, so if we want to play it down, it doesn't even need to be blue. Hope you don't mind me chiming on other areas besides the color, other elements might also play a role in the problem that you're looking to solve.

The new notification design looks horrible in modern skin with its grey rounded icon boxes. Also the boxes are too high to fit in the bBody navigation bar.

The new notification design looks horrible in modern skin with its grey rounded icon boxes. Also the boxes are too high to fit in the bBody navigation bar.

Can you please file a separate issue for that? There are already some other issues with Modern that we're looking into (e.g. T111825)

In Monobook the icons are black but should be white like in Vector.

This can be controlled by the section notification parameter, right? If so, please document that.

This can be controlled by the section notification parameter, right? If so, please document that.